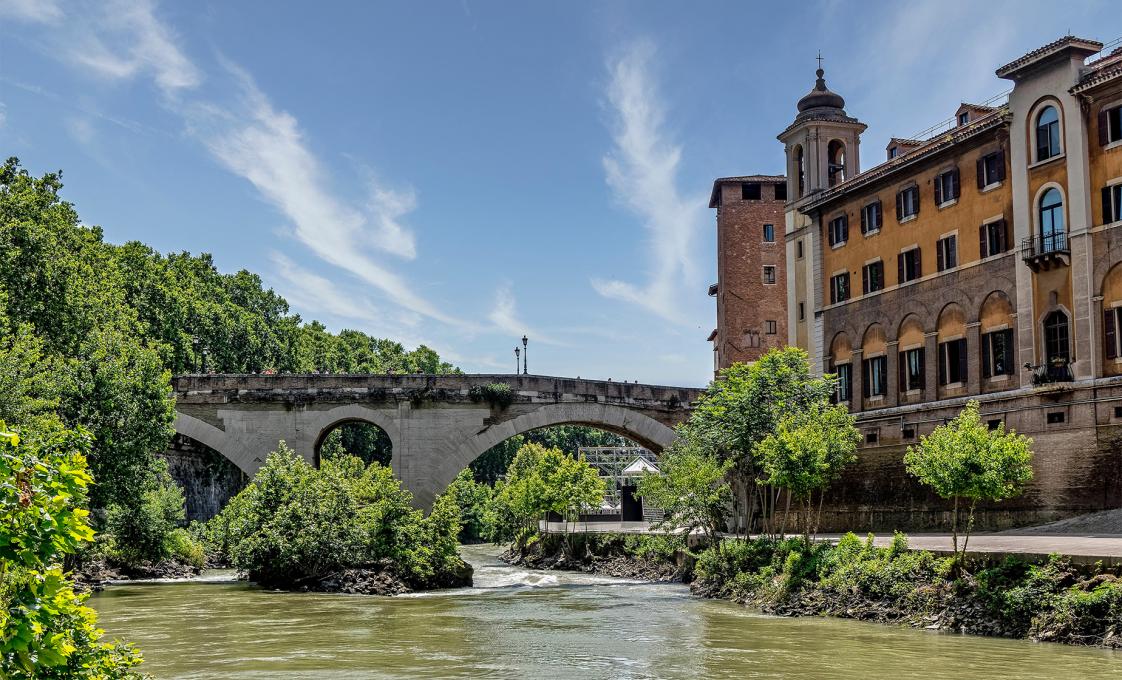 This action-packed Rome cycling tour will take you to the highlights of Rome as well as some of the city's best secrets. See the Pantheon, Colosseum, Spanish Steps, the Trevi Fountain, and much more.

Explore Rome with a Half Day of Biking

See Rome in a way you've never seen before: by bike! This extensive Rome bicycle tour will bring you to the main attractions of the city as well some of Rome's best kept secrets. With no hills and many stops at the various sights, this bicycle tour is for just about anybody; there's no need to be in top shape.

Your friendly tour guide will provide you with a bike and helmet, and you will then head to your first stop. This fun-filled Rome bike tour begins as you travel to the Colosseum, the largest amphitheater ever built in Rome. Admire the impressive Roman Forum and the Senate, appreciate Rome's historic past at Palatine Hill, take in the beauty of Michaelangelo's design at the Capitoline Hill, and see the remains of ancient Rome's largest theater, the Theater of Marcellus. Pass the ruins of Circus Maximus before arriving in the Jewish Ghetto, where Roman Jews, the oldest surviving community in Rome, once lived. As you look around, you will be told stories about the people who once occupied the area. Feel free to purchase a sample of some local cuisine for a real taste of Rome. Continue over the river to Tiberian Island, which was dedicated to Esculapio, the god of medicine, in ancient times. You will cross Fabricio, the oldest bridge in Rome, to get to the island. Next, cross to the other side of the island, known as Trastevere, where you will learn about Roman culture and history.

You'll then make your way to the Vatican, where you will stop directly in front of St. Peter's Basilica. See St. Peter's Square, the Angelic Gate, and the Castel of St. Angelo. If your tour is on a Sunday, you may even get the chance to see the Pope's blessing.

Continue your Rome cycle tour as you ride along the riverside. Enjoy the wind in your hair and beautiful views as you pass the Altar of Peace, a Roman monument dedicated to peaceful times. Next, ride along Via del Corso, lined with high-end shops, and see the Spanish Steps at the end of Via dei Condotti, Rome's most expensive shopping street. You'll also visit the Trevi Fountain, the largest Baroque fountain in all of Rome and one of the most famous fountains in the world. Throw a coin in the fountain so your wish will come true. After biking a short distance, see where the ministers meet and the official government business takes place. While you're in the area, you'll stop at the Column of Marcus Aurelius. Standing 30 meters high, this marble column is certainly a sight to see. Your comprehensive bike tour continues with a ride through the twisting streets and back alleys of Rome, bringing you to the Church of St. Ignazio on your way to the Pantheon. As the most preserved and historic building in Rome, the Pantheon is a must-see site. You will be amazed by its incredible architecture, specifically its spectacular dome, and its grand atmosphere.

This half-day tour is action-packed and thrilling. You will enjoy riding through the city by bike as you stop to see some of the world's most famous places.

Please Note: This tour takes place in Rome. Guests on ships docking in Civitavecchia will need to make their own way to Rome from Civitavecchia (approximately 50 miles away) at their own expense. There is train service from nearby train stations, and the average trip takes approximately 90 minutes each way. Your cruise ship may offer a shuttle to a nearby station.

We are experts in providing exceptional shore excursions. We understand that in today's fast paced world, vacations have become an increasingly important way to relax, reconnect with family and friends, and experience new and interesting places. With this in mind, we provide the highest quality tours by performing extensive research, and detailed reviews. While other companies also offer excursions, we strongly believe our expertise and approach set us apart. The large cruise lines sell shore excursions - typically in very large groups visiting high traffic sites. We focus on smaller groups visiting more interesting and authentic locations using more personalized local operators. While the cruise lines are experts in delivering cruises, we are experts in delivering shore excursions.

Our Approach
We believe quality service is not only highly valued by customers, but ultimately leads to better experiences and higher satisfaction. Unlike the cruise lines and other tour companies that rely almost entirely on websites, we encourage customers to call us. We want to invest our time answering your questions, providing input, and selecting the excursions that best meet your needs.

Our Tours
Our goal is to provide customers a wide array of exciting, appealing, and enriching tours. For those customers who prefer to travel in smaller groups with more personalized service, we offer a wide variety of small group tours around the world. These tours generally range in size from 2-12 people compared to larger tours which can number up to 50 people. While exploring the destinations and ports on this website, feel free to search for these "Small Group Tours". For those customers interested in private tours, we offer many outstanding excursions that allow you to travel with your party alone and, in many cases, to fully customize your tour. Search for "Private Tours" if you are interested in this experience. Our "Scenic" tours provide up close and personal access to some of the most spectacular natural environments on Earth from majestic glaciers in Alaska to spectacular reefs in the Caribbean. Our "Cultural" tours allow customers to experience local customs, entertainment and culinary delights ranging from tribal dances in Alaska to an outstanding local meal in Santorini, Greece. Our "Active" tours offer a multitude of exciting and adventurous ways to experience our destinations. Our customers can kayak the turquoise waters of the Caribbean, hike to a spectacular waterfall in Hawaii, or bicycle through quaint villages in France. Our "City" tours allow travelers to see the highlights of great cities around the world with unique insights provided by our expert tour guides.

Our People
In our experience, exceptional travel experiences are almost always delivered by exceptional people. With that in mind, we utilize a comprehensive approach to select and employ the leading tour guides and tour providers around the globe. We hold our people to very high standards which we measure by our comprehensive Quality Control process and, most importantly, by our customer feedback, which we will actively seek from each of our customers.

Our Owners
Shore Excursions Group is owned by seasoned travel executives possessing extensive experience across many sectors within the travel industry.

Michael Bonner
Mr. Bonner has over a decade of experience working in the cruise industry in a variety of roles for both Royal Caribbean Cruises Ltd. and Viking River Cruises. Most recently, Mr. Bonner was the Chief Operating Officer for The Scholar Ship, a Royal Caribbean program aimed at providing college students onboard educational programs in conjunction with enriching shore excursions around the world. Mr. Bonner also helped co-manage Viking River Cruises U.S. Operations, and he ran the corporate, strategic, and deployment planning functions at Royal Caribbean. While at Royal Caribbean, Mr. Bonner was responsible for forming Royal Celebrity Tours, Royal Caribbean's land-based tour operation in Alaska, which takes cruise passengers on multiple day tours through the interior of Alaska either before or after their cruises. Prior to working at Royal Caribbean, Mr. Bonner was a consultant for Booz Allen & Hamilton.
Less
from $62.00 (USD)
Per Person
Contact Us
Tour Type
Group
Group Size
Small
Activity Type(s)
Cultural, Active
Tour Duration
4 Hours
Activity Level
Difficult
Tour Leaves From
Central Rome.
Food/Beverage Provided
Not Included
Special Instructions
We recommend wearing casual, comfortable clothing and closed-toe shoes.
Restrictions
This tour is not wheelchair accessible. Guests should have a general knowledge of bike riding, and feel comfortable doing so.
Terms & Disclaimers